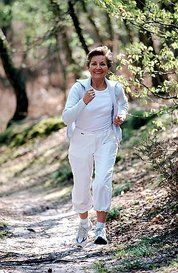 Due to the enormous variety of hormone replacement therapy (HRT) preparations, we would like to offer you assistance in choosing the optimal hormonal preparation adapted to your requirements and expectations.

We take a thorough medical history and perform a gynaecological examination, including cervical smear. We will recommend additional tests that will give you the comfort and confidence that the selected HRT preparation is beneficial for you.

HRT is designed to alleviate the hormone deficiency that occurs during menopause. It is an effective way of dealing with its symptoms – both early and late. It improves general well-being and, at the same time, provides protection against the long-term effects of sex hormone deficiency (osteoporosis and atherosclerosis).

In the case of urogenital atrophy, i.e. degeneration and thinning of the vaginal mucosa, accompanied by urinary incontinence, the use of local vaginal hormone therapy significantly improves bladder control and mucosal hydration.

There are different types and routes of administration of HRT. The method of choice depends on many factors, for example whether the woman is perimenopausal or has already stopped menstruating, whether she requires contraception, and whether the menopause is the result of a natural physiological process or the result of surgery or chemotherapy.

It is also important whether the woman accepts menstrual bleeding after menopause and whether there are any contraindications to the administration of a preparation.

In patients with an intact uterus, it is advisable to supplement the estrogen-containing drug with a preparation containing another hormone – progestin – at least for 10-12 days per cycle. Progestin inhibits the excessive growth of the endometrium.

In women without the uterus (surgical menopause), the classic hormone replacement regimen involves the administration of preparations containing estrogen in a continuous manner, i.e. one dose every day.

Possible routes of administration of HRT are:

HRT should not be used in women who have been diagnosed with an active malignancy (breast cancer, ovarian cancer, uterine cancer), severe liver failure, pregnancy, undiagnosed vaginal bleeding, otosclerosis, cardiovascular and cerebrovascular disorders, such as thrombophlebitis or embolism, at present or in the past.

In case of any unwanted side effects, we will advise you how to change the current hormonal preparation so that its use is as comfortable and safe as possible.

Some women use HRT for short periods – from six months to two years – to eliminate the initial menopausal symptoms. Today we know that the duration of HRT is individually selected for each woman and tailored to her personal needs.